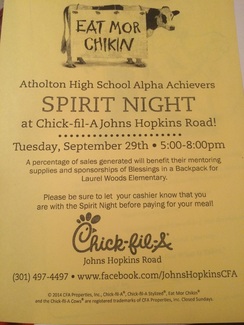 OCTOBER 14TH, 2015 - ALL members, including new inductees to talk about what we want to accomplish this year
OCTOBER 12TH, 2015 - OFFICER ONLY meeting in Mrs. Howard's room

PREVIOUS EVENTS
SEPTEMBER 29TH, 2015 - Come support the ALpha Achievers at the fundraiser at the Chick-fil-a on Johns Hopkins from 5-8. Come say Hi!
​
APRIL 8TH, 2015 - BSU Assembly: The Alpha Achievers of Atholton High will be performing a skit in front of the school about how we as young African American males should approach the current situation involving police brutality and injustice and how we can educate others about how they can fight against this injustice without utilizing violence.
APRIL 13TH, 2015 - Alpha Achievers fundraiser at Chick-fil-a, Come out and support our organization so that we can experience certain historical and significant landmarks and museums, and get Chick-fil-a at the same time!!
MARCH 24TH, 2015 - The Harambee Conference; a gathering of representatives from every Alpha Achiever Chapter in all 12 Howard County Schools. At this conference, the achievers were given a information on how to be better overall individuals and how to apply their newly learned tactics to take the next steps to fight back against injustice today, the right way.
JANUARY 11TH, 2014 - MLK Breakfast; A few Alpha Achievers attended the breakfast along side the older members of the Alpha Lambda and Alpha Phi Alpha Chapters in order to commemorate the biggest advocate for Civil Rights, Martin Luther King Jr.
DECEMBER 18TH, 2014 - Holiday Activity with Head Start; the achievers of Atholton joined with other groups and clubs in the school to help the kids at Head Start to build Christmas ornaments and other Christmas themed toys.
NOVEMBER 25TH, 2014 - Harvest For The Hungry; the achievers assisted in delivering turkeys and other food items to the less fortunate in association with FEA.